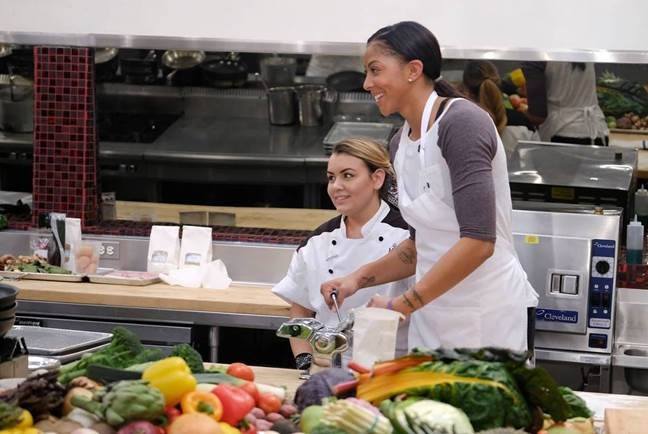 Los Angeles Sparks’ superstar Candace Parker usually cooks up opponents on the court but this past week she torched her foes in the kitchen.

Parker appeared on the Fox television show “Hell’s Kitchen” and was hoping to stir up a victory at Gordon Ramsay’s Las Vegas restaurant.

Partnered with Hell’s Kitchen All-Star, Michelle, Candace was immediately thrown into the fire where she had to do all the cooking while her chef partner coached her through the process.

At one point, Candace bantered with NBA legend Reggie Miller, saying, “We’re not even sweating over here! We’re not even nervous!”

The duo had nothing to worry about and whipped up a winning dish, pasta tossed in uni sauce with seared sea bass and miso beet puree. Their dish had beat out Reggie Miller’s dish and only had former NFL Pro Bowler Shawne Merriman and chef partner, Benjamin, to beat out. But just like Candace does late in games, she came through in the clutch and Ramsay named their dish the winner of the challenge.

Chef partner Michelle was awarded with a helicopter trip of Los Angeles and dinner at a restaurant located 1,000 feet in the sky.

Coming off her win, Parker, always in her competitive nature, went to Twitter and gave fair warning to teammate, Nneka Ogwumike, her cooking prowess is coming for her. Stay tuned for the next cuisine challenge.

Congratulations to Candace and Michelle on the win!